Duplos, legos, or cubes that are the same size and connect together

Make two towers using different numbers of blocks, such as one with 2 blocks and one with 4 blocks. Ask your child, “Which has more blocks?” After your child answers, count the blocks and explain, “Yes! This one only has 2 blocks, and this one has 4 blocks, so this one has more, because 4 is more than 2.”

Next make three or four towers that each have a different number of blocks, and ask your child to arrange them from least to most. Help them count and talk about how numbers relate to each other as you order them: “We will put this one with 2 blocks in the middle because it is more than 1 block and less than 3 blocks.”

Use words like “most”, “least”, “more”, and “less” to talk about comparing the blocks.

When your child is able to arrange the towers in order and use the same words (most, least, more, less) to talk about the towers, it may be time to move on.

?Have a question? We are happy to answer! 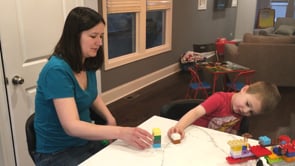 Before you go
it would be helpful to us
(the UChicago researchers behind the site)
if you could answer three questions.